Where to begin. It’s all a blur but we had a great time. It was our first Fair/Festival and it was amazing to be a part of such an awesome event with other awesome vendors. Thank you to the Fair organizers for all that they did!

Fairs/Festivals were never a part of my vision for Yoga-urt, but when I was approached a few months ago, something about it felt right, and I wanted to do it.

However, we got a major CURVEBALL on Thursday night, 2.5 days before the Fair. Although we were told it was fine a few weeks before, on Thursday night, the Fair organizers called us to say that the health department would not allow us to bring a soft serve machine, and if we did, both Yoga-urt and the Fair would be sited. They challenged it, explaining that I’m non-dairy, but nothing worked.

I didn’t know what to do. I considered not going but didn’t want to let people down, plus, I really wanted to go.

I than tried to come up with other ways to make it work. I thought about swirling them at the store and freezing them with dry ice, but despite my best efforts of going to 6 different stores, I couldn’t find the right cups with lids. They have them online, but there was no time to order them.

The other solution is what we did. Run the product through our machines at the store, freeze them, and scoop them like ice cream. I got the proper containers on Friday, tested one on Friday night, which means we had ONE DAY to run about 25 gallons worth of product through our machine, mind you we were also open on Saturday and had a very busy day at the store. Juggling. Juggling.

The machine needs to breathe a lot so that the product comes out the right texture so it was a VERY LONG PROCESS. This was our only choice and my team and I worked our asses off doing it. Thank God all of the machines were working!!!

Everything changed with that phone call on Thursday. All of my planning over the last few months went out the window, and new plans were made.

I was very concerned about introducing our product to so many people as ice cream, when we sell soft serve/frozen yogurt. It concerns me that we weren’t represented properly. The taste is the same, and we definitely taste good that way, but it’s not as fun and unique and not us. I know that so many people were looking forward to soft serve. My team and I were totally bummed to say the least, but the show must go on.

So I had to find dry ice, a place to store all of these frozen containers, plan how I was going to announce the change to the public (I was so nervous about that), get ice cream scoopers, in addition to all of the other stuff we had to do (make 100 waffle cones, make 25 gallons worth of product, etc). It was crazy!!!

Thank God for my team and my family who all stepped in and did whatever they could. The Fair organizers felt horrible too and wanted to help as well.

So we did the scoops with our toppings. It seemed to be received well, but hard to know as there was a long line all day and I was in the tent serving people. Some people said some really nice things about us on social media, and Kat Von D came to our booth which was awesome!

Then there was the donut cone. All I will say about this is that we were approached to partner on it early on. My gut told me it was off brand as we promote health and are very careful about the ingredients that we use, but I considered doing it at one point. After sharing with some close family and friends, my doubts became greater and we weren’t involved anymore. However, the donut cone got the most press from the Fair and the public, so I do question if I made the right choice. Ultimately, I believe that I did and that we are strong enough without it, but it definitely added another layer of bummer to my experience.

I’m still exhausted from the big push, but I’m taking today off of my day job, and will rest and recover. Somehow we pulled it off despite all of the curveballs!

Thanks again to all of you who came out to support us or tried us for the first time. We hope that you’ll come to the store for the full experience. 💜❤️💜 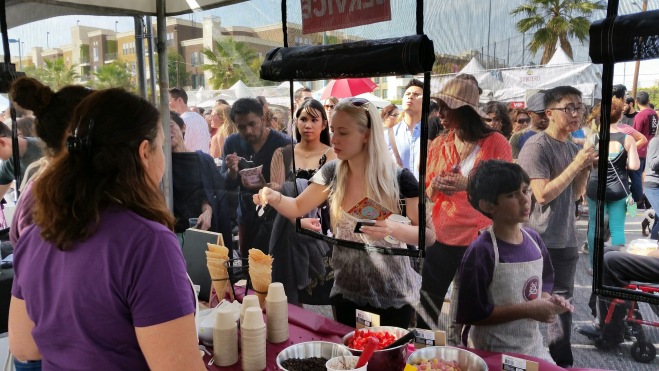